Another snippet! And it's only a little more than a month until A Case of Poisons will be out on June 3rd! I've very excited, but I've got lots more to do before the release as well. Most of which is getting my blasted Kickstarter started (they should have a kickstarter for that too, I usually use coffee.) HOPEFULLY I will actually be able to do that this week, but I have run into several sticky spots, but hopefully they will all be resolved.

Here's a little sneak peak as to what you have to look forward to next month in reagards to Anthony's first book being release:

-My Kickstarter where you get to pleadge money to the production on A Case of Poisons and possibly later books and get awesome thank you presents for that.

-I'm going to be putting up a video for my Kickstarter where I read the first chapter of the book.

All in all, very fun stuff, but now for the snippet!


We left the crime scene before the Inspector and his troupe did and I took several back streets to get back into town faster. We had only been driving a few minutes when Scamp leaned over the back seat to speak into my ear.
‘We’re being followed.’
I took a quick glance into the mirror on my door but didn’t see anyone. I didn’t doubt it was true, though. ‘Where and how many?’
‘Two streets back; looked like two men on foot, though maybe more behind them,’ she said.
‘I thought I felt someone watching earlier,’ I told her.
‘Do you think it could just be street toughs, Tony?’ Tobias asked, though I could tell even he didn’t believe it.
‘No,’ I replied simply and took another turn down a back street before I pulled out onto one that had several other drivers on it. I cut across the intersection and we were finally into the more respectable part of town again. I cast a quick glance back and just caught sight of a coattail disappearing around a corner. I didn’t like the idea of being followed, especially when I suspected it was by men who were in cahoots with the murderer. 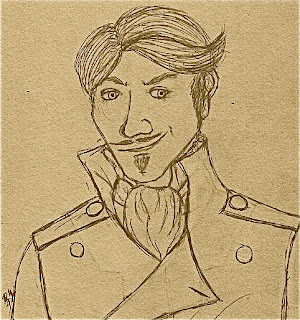 ‘Whoever they were, we lost them,’ I told my companions.
‘I don’t think they wanted to stop us,’ Scamp said. ‘I think they just wanted to see where we were going or what we were doing.’
‘Shame,’ I said with a grin. ‘We could have invited them to lunch. Come now, let us find some sustenance before we must think again.’

This is the new picture for Anthony's Facebook page. I'll let you all know when the coloured one is up!

Until next week!
Slainte, Hazel
Posted by Hazel West at 2:03 AM