It's time for another Tuesday Snippet! This is one of my favorite parts in the book, where Anthony has to confront a group of air-headed medical students who found a body fitting the murderer modus operandi (MO for those who watch modern crime shows) while grave digging and he has to wrangle information out of them despite his personal feelings toward them.

‘Well, Maxwell, are you going to question them or not?’ Garrett growled, his notepad held ready to write down the answers I pulled from the witnesses.
‘Yes, Inspector; just collecting my thoughts.’ I cleared my throat and turned to the student closest to me, a thin young man with dishevelled brown hair pushed back by a pair of what I recognized to be Dobson’s new ‘moonlight goggles’. Tobs had bought me a pair for Christmas the past year and I had found them to be most useful in seeing in the dark, despite my original scepticism. Two other students wore these as well and it practically screamed their guilt as to what they were doing in the graveyard.
‘I take it,’ I began, crossing my arms firmly over my chest and motioning to the goggles, ‘that, judging from your gear—’ I had also noticed one holding a pair of shovels ‘—that you were out grave digging. That in itself is no worthy pursuit, my dear gentlemen, as the good Inspector has either informed you of already or soon will.’
‘But it must be done, my good chap,’ said the lead fellow with the moonlight goggles. ‘It’s hard to come by bodies, and we must continue in the name of science!’
‘I have found in my time working at Scotland Yard that it is not hard to come by bodies at all, especially those of the murdered variety,’ I said blandly. ‘Do you have no respect for the dead?’
‘They will not allow us to use living bodies,’ said another student, looking quite mortified with the fact that they could not use living bodies—did you know, dear chap? I refrained a sigh.
‘That’s a terrible shame,’ Scamp said, her voice dripping sarcasm, which was obviously something these slow-witted specimens of humanity didn’t understand, or at least it was not important enough to strike their illustrious interests.
‘It is, Miss,’ said Goggles again. ‘Certainly, it would be more productive, with less second-guessing. But that is our bane. We must do what the great De Vinci did!’
Ah, De Vinci. Despite my admiration for his spectacular inventions, I feared I could never quite forgive him the illegal grave digging. For all the men who had ended up with their heads spiked on London Bridge and their limbs scattered over the country, traitors or not, I thought it very cruel to deprive the folks who actually had the chance of being properly buried of being just that. But I was digressing too much, and the Inspector would be mad if I did go any further so I returned to asking questions.

And also I've done a picture this week of Inspector Peter Garrett (I actually don't think I ever put his whole name in the story, but that's it). 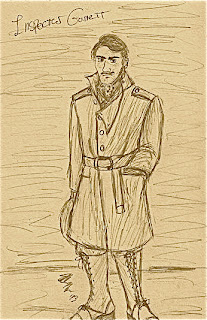 Next week, I'll be posting another really awesome part from the same chapter, and I also hope to have another blog post up sometime this week!

Slainte, Hazel
Posted by Hazel West at 9:59 AM