Giveaway Announcement/ General Self Promoting and an Anthony Maxwell teaser!

Hello everyone! Okay, first things first, the giveaway I started for my blog tour is up and I have drawn the winner of my backstories collection from my hat: 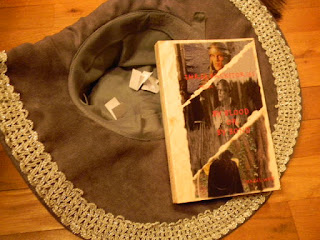 The winner is: Kathy Garlock ! Congratulations!!

Also, I am totally excited to announce that "On a Foreign Field" was picked for a group read for February on the Goodreads group "Books, Blogs, Authors, and More" and if you are interested in getting the chance to read it for free, you can go and join the group and sign in here and I will provide an e-book copy for you! There's also an open discussion thread where you can ask me any questions you have about the book or discuss it with other readers.

You can also view an interview I did for the read here: http://www.goodreads.com/topic/show/1189042-february-2013---on-a-foreign-field---author-interview-and-questions

Apart from that, I have been working very hard on writing the first book in my Anthony Maxwell mystery series. If you look on the sidebar to the right, you can find Anthony on Facebook and follow him to see all his updates. You can also view his board on Pintrest here (Oh, yes, did I mention I am on Pintrest now? Well, yes I am! So you can follow me there too, if you so desire!)

For those interested, this is the case so far: 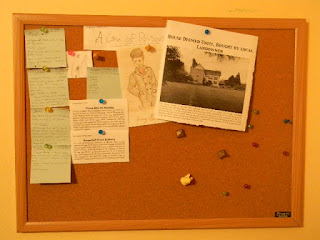 Will you make anything of it? Hopefully not! You'll just have to wait until spring to read the book, but for now, here's a little teaser:

The place didn’t look like it had been touched since the Reformation, and looking at some of the grave marker dates, that assumption turned out to be quite correct, but I could tell at once that some of the lots were hardly as old looking as the mossy stones and crosses that were scattered in the haphazard way of old graveyards. In fact, it was my firmest belief that several of the graves looked quite new.
Tobs saw this as well. “Tony, if it wasn’t for the dates on the headstones, I would think that that grave had been dug no later than yesterday.”
“My thoughts exactly, my dear chap,” I replied as I crouched down by the nearest plot. The turf was lumpy over top of it, as if it had been carefully removed and just as carefully replaced once the ground had been dug underneath of it. I would have said grave robbers, expect for the fact that, one, this graveyard was of Puritan origin, and it was a well known fact that the Puritans had little to nothing of inherent value, and two, a freshly dead body had been found in the vicinity just that morning. I turned to Scamp.
“My dear, would you go and fetch my collapsing shovel from the boot of Tobs’ contraption? I do believe it should still be there from the Waxford case unless our friend has removed it.”
“No, it should still be there,” Tobias replied and as Scamp trotted back to the road to fetch it, I turned back to start peeling up the sod from the freshly dug grave. I noticed out of the corner of my eye, Mr Bradswell rocking impatiently from one foot to the other. I finally turned around as he cleared his throat.
“I’m sorry, but, do you need me anymore? If not, then I really must get back to work,” he said.
“That is fine,” I told him with a wave of dismissal. “We know where to find you should we need you again.” Not likely, I added in my mind. The only people I counted more incompetent in an investigation than the inspectors who could not ask the right questions, were the witnesses or victims who could not provide the right answers to questions not even asked. Sometimes I wonder how a race that, for the most part, was born almost annoyingly curious, cannot be so when it really matters.
Scamp came back with the folding shovel and I stood, handing my cloak and jacket to Tobs as I stomped on the back of the shovel and watched it pop open with a twang. I then set to work, digging at a steady pace, and glad of the light rain that misted my face as I worked. It was not very long before I uncovered something among the dirt. It was cloth of some sort, and not nearly as old as it should have been had it belonged to the grave’s original occupant. I carefully shovelled more dirt aside now, hating the thought of accidently stabbing the spade into a dead body, and then bent to brush more dirt aside. Tobias and Scamp crouched over me as I did so, eager to see what terror incognito I might unearth.
I brushed aside more soil from the fabric and then found at the end of it, a human hand. I recoiled at the touch of it at first, for I had not expected to find it there—foolish of me, I know, seeing as it was my own idea to go digging in graves—but once the initial shock was passed, all three of us bent to unearth the body that was hidden in the grave. As we did so, I had no doubt as to what we had found. I sat back on my heels, rubbing my hands vigorously in the dewy grass to wipe the dirt from them and turned to my two companions.
“I think it is time we speak to Inspector Garrett again,” I said grimly.

I hope everyone has a great weekend and I will be back with more posts soon.
Slainte, Hazel