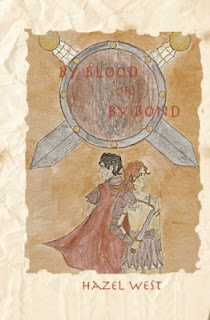 
It's here! By Blood or By Bond is finally released! Just in time for buying as a Christmas gift for your historical fiction lover (hint,hint) I'll be posting all the purchase links here as they are available. Currently, it's only available in paperback from Createspace, which is a wonderful thing! Later it will be up on Amazon and I'm getting the e-book ready as well while I will let everyone know about as soon as I do. I'd also like to let everyone know that I'm working on the hard copy version of my backstories, so I'll let you all know about that when it's up for purchase as well.

Another thing: I am trying to get a blog tour together to promote Blood or Bond, and if you would like to host a stop, please let me know! I'm trying to find at least three more stops. If you'd like to, please email me at sirwilliamssquire@gmail.com For those of you interesting in following the tour, and you should because there's going to be some (hopefully) awesome guest posts by me about Roman and Celtic history/culture and writing the book, interviews, and not to mention promotions and giveaways that you're going to have to comment to get! I'll be posting the itinerary soon once I get all my stops together.

I do hope that By Blood or By Bond might be a book for you. If you get it, I hope you enjoy!