Home Before the Harvest--Short Story Release! 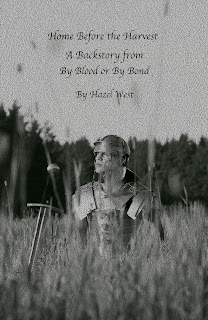 Well, I'm excited to announce my newest backstory for "By Blood or By Bond": "Home Before the Harvest" and also sad because it's the last one that I have planned at the moment (though that plan might not last very long either). My inspiration for this...well, let's just say Horatio Hornblower fans might see where I got some things from...


Now a centurion in the Roman army, Viggo Aulus Callias and now his younger foster brother, Hector, find themselves in Germania on duty. He's looking forward to his leave to go back to his wife and see his son for the first time that autumn, but that hope becomes more desperate when he finds that his old enemy, Tribune Amatus, is serving his military term in the same legion.

This is the third and final story is a series of backstories for Hazel West's upcoming novel "By Blood or By Bond" about one of many of Viggo and Hector's adventures with the Roman legions.

And here's an excerpt for buying incentive!

“Sir, the new tribune has arrived and wishes to present himself to you. Shall I show him in now?”
“Yes, bring him here,” Kaius said. Viggo made to leave, regretfully putting aside his half finished wine. “No need to leave, Callias, you’ll need to meet the tribune eventually anyway if you’re to be working together.”
Viggo settled back down but as the door opened again to admit the new arrival, he and the legate both stood to greet the man and Viggo nodded his head slightly in respect of the man’s higher position before he heard what Kaius was saying.
“Ah, Tribune Amatus, I trust your journey was satisfactory?”
“As satisfactory as it could have been in this wasteland,” came a snobbish voice that Viggo knew all too well. He looked the man in the eye and a flash of sickness and anger flooded through him, making him clench his hands into fists involuntarily as that smirk appeared in the corner of the tribune’s mouth.
“Tribune, this is Centurion Viggo Aulus Callias, he will be serving with you. Callias, this is Tribune Amatus.”
“I know,” Viggo said, trying with every ounce of his being to keep his voice civil. “We have met.”


Both on Smashwords and Amazon Kindle:

But before you read this story, I would advise you to read "To Save a Life" if you have not already. It's not totally necessary, of course, but it will have more meaning if you do. Also, if you have purchased any of my stories from Smashwords, I would really appreciate it if you have written a review, that you put it on the Smashwords website. I haven't gotten a review or rating there yet so I would love it if you would post a review there whether it's bad or good ;-)

As an update, my novel's title is now officially change to "By Blood OR By Bond" (it makes more sense that way) and it should still be out by Christmas.

Also, now that I have the three of these stories written, I will be publishing them as a combined anthology in a paperback from Createspeace and that should be up by the end of the month. There also might be some surprises in the print copy, but we'll see.

Apart from that, again my apologies for not blogging writing tips right now, but writing is taking up all of my free time (which is pretty much all my time right now).

Also, I am looking to create my own blog tour for the release of "By Blood or By Bond" sometime, hopefully at the end of December through January, and I'm looking for historical fiction bloggers who might be interested in hosting me. Please email me at sirwilliamssquire@gmail.com if you would like to help out, and I'll keep you posted on details!

Email ThisBlogThis!Share to TwitterShare to FacebookShare to Pinterest
Labels: book covers, By Blood and By Bond, ebooks, excerpts, historical fiction, Home Before the Harvest, my books, Roman, To Save a Life, Viggo