To Save a Life- Short Story Release! 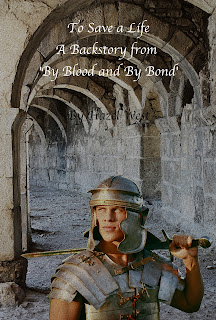 Aa a little treat for everyone, I'm going to be publishing a few short stories in preparation for my next novel "By Blood and By Bond" which I haven't talked much about yet, but will be talking more about now, and also on my tour! It's a story set during the Roman era, and will feature alternating perspectives of my two protagonists, one a Roman centurion, Viggo Callias and the other, the son of a Celtic chieftain, Caolan. During a battle in Britain, both Caolan's father and Viggo's son are killed and because it was Caolan's father who killed Viggo's son, Viggo swore vengeance on the Celt by taking Caolan as a slave of Rome. Caolan eventually finds himself thrown into the ranks of the gladiators and Viggo, wounded in the battle and honorably discharged, is sent back to Rome to live with his niece, Lorena, who is the only family he has left while he tries to fight off his old enemy, one, Tribune Amatus, who Viggo needs to settle a debt with and also keep away Amatus' unwanted advances towards Lorena. Through unforeseen circumstances, Viggo and Caolan are brought together by Lorena, and Caolan needs to decide if he can forgive the uncle of this Roman girl who has been so kind to him after all he has done, while Viggo needs to decide if he can overlook what Caolan's father did and realize that the young Celt is not much different from his own son. As you can probably see, I have not had much time to think of a good synopsis, but that is the general idea of the story, so it's my own fault if this makes it sound boring ;P

And I decided I am going to write three backstories to go along with the novel so that readers can have a chance to get to know the characters a little better. And it's also so that hopefully, reading the backstories will make you want to read the novel when it comes out as well. ;-) This is the first of the three and here's a little more about it:
~~~


To Save a Life

This backstory to Hazel West's upcoming novel "By Blood and By Bond" is a look into Viggo's character, and introduces the heroes and villains from the novel.

And for fun, here's a short excerpt!

Viggo moved off in the same direction as Amatus had, following him out of the theater. It was dark now, showing how long they had been there. He thought suddenly how stupid it was to do this since Amatus was most likely really off to the latrine, but he could not resist the slight glance the junior tribune had flashed at him when he stood. He knew this man was no good, and, though perhaps tempting fate, he followed him into a back alley, wondering what kind of shady things Amatus might be caught up in.
He turned another corner he had seen Amatus go around and suddenly found himself standing in a very dark alleyway between two streets. He did not rightly know where he was, but he figured it was not a very good part of town, mainly deduced from the smell. He had lost sight of Amatus, and he was about to turn around and give up the small chase when a figure appeared in front of him as he turned to head back out of the alley.
“Going somewhere, legion rat?”
The man stepped forward into the one shaft of light from the street, revealing himself, but Viggo only needed to hear the sneering voice to know it was Amatus.
“Just taking a walk,” Viggo told him firmly.
“Just taking a walk,” Amatus mocked, moving closer. Viggo refused to step back; he would not give Amatus that satisfaction, and he stood his ground until the young tribune was only a foot away from his face. “Were you perhaps following me, wanting to see where I was going?”
“Come to the conclusion you want to,” Viggo snarled at him.
The blow came before he realized what had happened. All he remembered was thinking that Amatus was a lot stronger than he had expected. His jaw throbbed and he pulled his head back around slowly, tasting the metallic tang of blood. Every instinct in him told him to hit Amatus back, but he knew he could not do that. It would be a breech of bloody protocol, and Viggo knew that Flavius would kill him if he did so even if the senate didn’t.
“Come,” Amatus sneered. “Can the soldier not even hit back? Strewth, I fear for Rome with men like this protecting her!”
Viggo nearly gave into temptation, but before he could two sets of hands grabbed his arms from behind and slammed him up against the wall roughly, knocking the breath from him.
“See if he is such a coward he will not try and save his own skin,” Amatus said, the glee apparent in his voice.

You can find the story now on Smashwords and Amazon Kindle as well. It's currently only in ebook format, but don't worry all you devout Page-Flippers like myself! I will have a paperback copy of all three backstories available once they are all published which should be within a month or two (make for a good Christmas present).

I'll be back with more posts soon, and don't forget to check out my blog tour with "On a Foreign Field" and enter for a chance to win a copy on Goodreads, and for a $25 dollar Amazon gift card and please comment on the tour because I love to hear from you!

Also I'm hosting for a tour myself this Friday so stop by for my chat with YA author, TJ Dell!

Slainte, Hazel
(Hazel apologizes if this post is a little hectic, and if it doesn't make much sense, because she is very tired and has too many things to think about ;-)
Posted by Hazel West at 8:22 PM

Email ThisBlogThis!Share to TwitterShare to FacebookShare to Pinterest
Labels: book covers, By Blood and By Bond, Caolan, ebooks, excerpts, historical fiction, my books, To Save a Life, Viggo