Battle of Stirling, and Interview with a Special Guest!

Hello my dear readers! Today is the commemoration of the Scottish victory at Stirling Bridge, when Wallace sufficiently whipped proud Edward's army and sent him homeward (to think again) ;) If you want to read more about the battle, this is a link to a post I wrote about it on my other blog : http://bonnetsandbroadswords.blogspot.com/2010/09/stirling-bridge.html

The Battle of Stirling is where my new novel "On a Foreign Field" begins. On the eve of battle, Sir Reeve Montgomery is anticipating beating the Scottish rebels the next day with the English army at his back, but little does he know that things are going to turn out far differently than he thinks. (Read the excerpt here)

Today, I have a special guest with me, Sir Reeve himself! Now that his book is finished, he has lots of time to talk and he'll be doing an interview today! 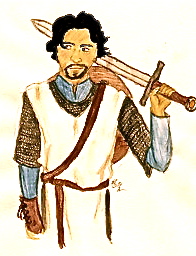 Hazel: Hello Reeve, thank you for talking to us today. How does it feel to be done with your story?

Reeve: Good. It was a long process and very exhausting. I'm glad for the chance to go to a normal life with my family.

H: So what was your favorite part in the story?

R: Well, can I say meeting Maggie without giving away too much to readers? Besides that, scrapping with Gavin was good, though painful.

H: What was the most challenging bit in the story for you?

R: I think the whole thing was a challenge! You certainly didn't make it easy on any of us. But my decision is the ultimate thing I suppose, which I will not reveal for people who have not read the book yet.

H: Who is the most easy person to live with out of Wallace's lads and who's the worst?

R: *laughs* Henridh is the easiest, definitely. He's a little troublemaker but he is a good lad and more like a younger brother though I never had one. Gavin is definitely the hardest. I can't turn my back on him without getting hit or have some kind of practical jest played on me. It's very hard to be the only Englishman in Wallace's camp.

H: Was there anything you would change in the story if you could?

R: Dangerous question for me to answer. ;-) Truthfully, I can't say that at the end of the day I have any complaints besides the things you couldn't change for historical accuracy. But on behalf of the other lads in Character Purgatory, I have to ask: When are you going to start writing more romance and less battle sequences where we just end up getting injured?

H: Tell the lads, when pigs fly, Reeve ;-) Other people have done the same as me with great success (I know, I buy their books). So, without regarding me, do you think there might be a chance for a sequel of some sort?

R: That's a hard one. If you called on us, we would come. I can see perhaps several short stories. And then there's that Bruce novel you keep talking about writing. Do you think if you ever do that we might make an appearance along with a couple other forgotten characters?

H: Are you the new character advocate, Reeve? You might be on the mark with that. We'll have to see after my current projects. Now, before you leave, Reeve, tell the readers why you think they should read your book.

R: Because it's both an adventure and a thoughtful story. There's a little something for everyone in it, there's characters you can relate to, there's a strong element of brotherhood and loyalty, a little romance, (lots of blood and gore if you like that sort of thing) and overall, hopefully a good message to the young readers (and maybe the older ones too). Thank you for interviewing me today Hazel.

H: Glad to have you back Reeve! Thanks!

You can find Reeve's story "On a Foreign Field" in the links below:

And don't forget to enter for a chance to win a signed copy and an Amazon gift card on my blog tour! Read the interviews and guest posts to find out more about "On a Foreign Field" and yours truly, the author ;-)