Ballad of the Highwayman Sneak Peak!!!

Ooh, an all mysterious sneak peak of my new book, Ballad of the Highwayman. And here it is: 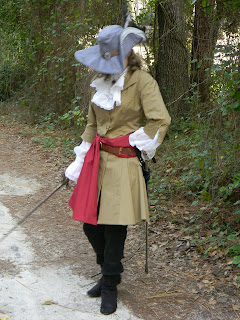 Well, the mysterious lady author has to have a little fun doesn't she??
Besides my new highwaymen outfit, here's the official sneak peak from the back of the book:
"Stand and Deliver!"
Kilroy Allen grew up as a normal boy in the small English town of Newbury, but when his father, an officer in the Royalist army of King Charles I is set up and accused of betraying his king to Oliver Cromwell, Kilroy's life will change forever. Witness to his father’s execution at the hands of the people the man loyally served, Kilroy knows he will never rest until his father's betrayer is found.
Sixteen years later, Kilroy, now turned highwayman at night and trader Jeremy Glennon by day, is still looking for the man who betrayed his father. Stakes become even higher as he realizes he cannot wed his childhood sweetheart, the lovely and capable Sylvia Davies without first putting his father's case to rest. He sets out to find his hidden enemy once and for all, ready to be free of the events that have haunted his whole life.
With good humor, romance and danger at every turn, Ballad of the Highwayman is a revival of the classic adventure story that readers of all ages will enjoy.
Enjoy that for now, I'll have a guest post later on this week to tell a little more about the series!
Slainte, Hazel
Posted by Hazel West at 8:36 PM

Email ThisBlogThis!Share to TwitterShare to FacebookShare to Pinterest
Labels: Ballad of the Highwayman