Freedom Come All Ye (From Will's Point of View) 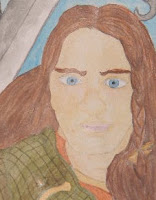 Good day, everyone, I'm William Wallace, a good few people might know me, but I was nothing like a certain actor on a certain movie (see I'm doing the same thing Hazel does) Actually, I'm me when I'm sixteen years of age. Hazel asked me to write a post today about how I felt about her new book about me entitled Freedom Come All Ye. It's a book about my first escapades that got me into the chronicles and also into an epic Blind Harry wrote about me called The Wallace. Hazel's book introduces a villain of her own making and she said that I am on NO CONDITION supposed to tell you if, or if he isn't, slightly named after someone. Nae, you're not getting anything more out of me, did you hear that, Jack? But anyway, my nemesis in this book is General Jack Moore, an Englishman in charge of Sir Henry Percy's garrison in Ayr where my uncle is the sheriff. You'd think that, getting into trouble like I do all the time, it would be a good thing to have your uncle be the sheriff, but no, not when the English are there to make up their own rules.

Jack has had something against me since I told him he couldn't just steal my fish that I had been catching all day. I did kindly offer some to him, but he was a greedy numpity and couldn't have that at all. So I fought him and gave him a lovely scar on his ugly mug and stole his sword. I later found that sword was my father's, so then I knew that it was Jack who had killed him. So you can probably see where that is going.

So then, my comrades, John Graham, Kerlie, Stephen Ireland and a few others started a resistance against the garrison in Ayr. And lots of stuff happens that you'll have to read the book to find out, most exciting of which, we get a camp lass who's name is Marion Braidfoot. And yes, we fall in love, that's the history after all.

Hazel asked me if there was anything I would have liked to have changed about the book. I wouldn't really have, but I have a few complaints. I would have probably liked to have been beat up and tortured less by Jack, but then "apparently" he wouldn't have seemed so evil. Then maybe I would have liked to have a little more romance between Marion and me. But Hazel's stories are always rated thusly: Romantic content: G Violence: R. Okay, that was a bit of an exaggeration, even considering she writes medieval pretty well. But then we're still not sure what she's going to do with her upcoming novel Freedom's Sword, another book about yours truly, now that she's "revising" it. She claims there will be "extended battle sequences" so I think we all know that that means. And frankly, I'm afraid to see what she'll do about Cressingham. If you don't know that story, go google it, or whatever you modern people do to look things up.

So, also, Hazel wanted me to remind you that tomorrow, Sept. 11, is the anniversary of the Battle of Stirling Bridge, one of our few great Scottish victories. And she would also like to apologize for not making any t-shirts to commemorate it for her Cafepress store. (Which you can find in the link list and go and get yourself a Team Wallace t-shirt. I assure you they are much more "awesome" than all those, ahem, other team t-shirts that are running around if you follow me.) And don't forget the river that the bridge crossed everyone! Because that is what won the day!

So, despite the fact that this is probably really garbled, so and find a copy of Hazel's new book Freedom Come All Ye. Despite some problems, I really enjoyed being a part of it. (No, I'm not paid to say that. We don't get paid until she does, so go buy one. Now!)

Fare thee well, for now, my good comrades all,

Will Wallace
Posted by Hazel West at 11:54 AM